Homepage > News > News >
News Exhibition Events Media
Songuo Motors became a significant company for contract signing in the "Deepening Shandong-ROK Open Cooperation Promotion Conference”
2019-12-04 16:18:00
From December 1st to 3rd, Liu Jiayi, Secretary of the Provincial Party Committee of Shandong Province, led a delegation from Shandong to visit Republic of Korea to promote economic and trade cooperation and pave a rood of win-win. On the afternoon of December 3, the "Deepening Shandong-ROK Open Cooperation Promotion Conference" was grandly held at Grand Hyatt Seoul. The purpose of the event is to practice President Xi Jinping’s diplomatic ideas, create a new highland for opening up, provide the overall situation of open cooperation between the two countries with better services, enhance the advantages of cooperation, build up the space for cooperation, and open up a new space for mutually beneficial cooperation between Shandong and Korea. 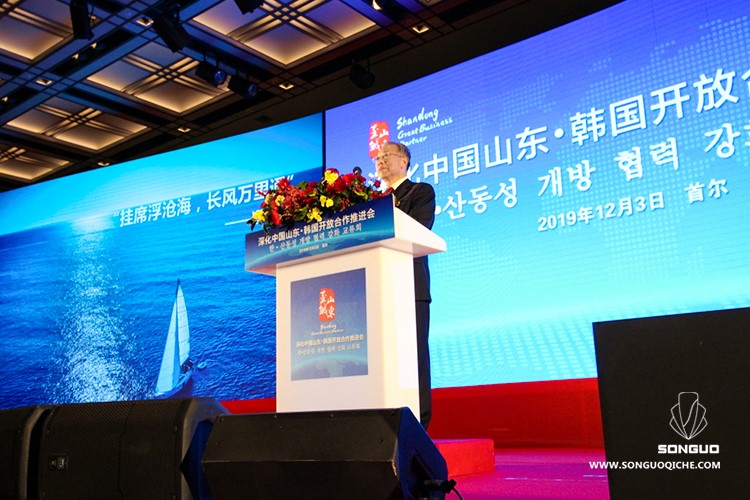 Secretary Liu Jiayi attended the meeting and delivered a keynote speech. Qiu Guohong, Chinese Ambassador to the Republic of Korea, Xu Changxiu, a representative of Korean large enterprises, the president of the National Association of Economic People, and the chairman of the GS Group, delivered a speech. Sun Licheng, member of the Standing Committee of the Provincial Party Committee and Secretary General, presided over the meeting.

As an important part of the promotion meeting, key projects for cooperation between the government and enterprises were signed intensively. With the cooperation project on BSS (Battery Swapping System) infrastructure between Songuo Motors and Samsung SDI, and Songuo and Korean SNK Group's new energy vehicle SKD assembly plant project, Songuo became the first company to sign the contract. Songuo also became the only company that signed two projects at the same time and signed three projects during the meeting. 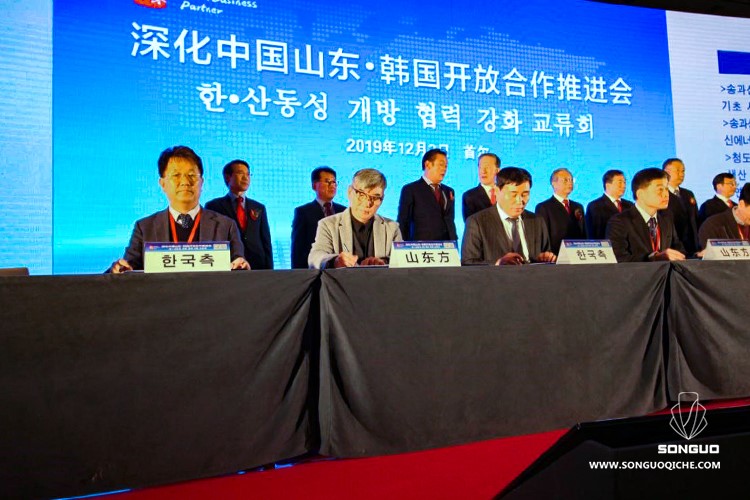 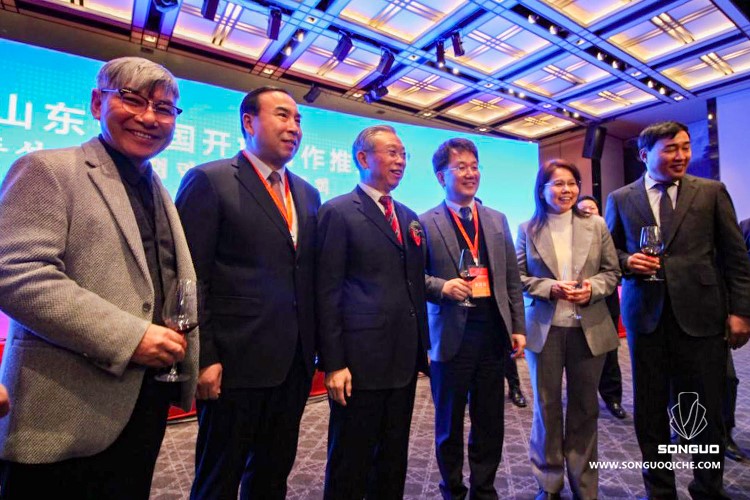 On the morning of the same day, the G-Songuo New Material Modular Building Project participated in the "Shandong -Gyeonggi Enterprise Cooperation and Exchange Meeting" organized by the Provincial Ministry of Industry and Information Technology during this event, and participated in the signing ceremony of "Create a New Platform for Cooperation of Shandong and Gyeonggi Enterprises". 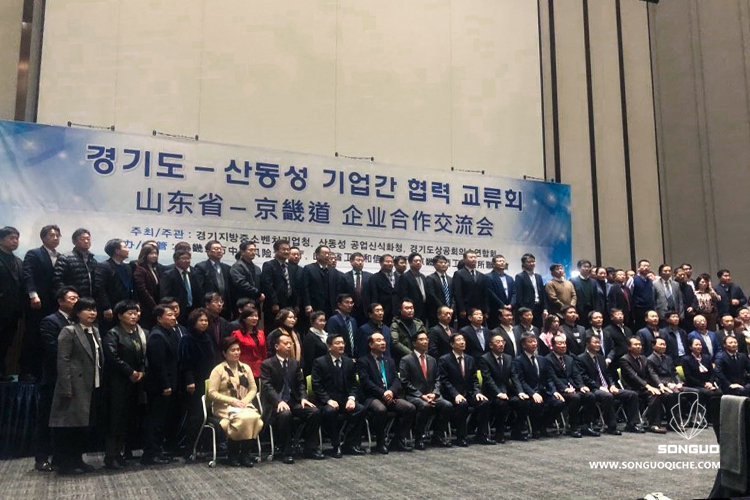 Ji Binchang, director of the Provincial Ministry of Industry and Information Technology, witnessed the signing of the contract and expressed his concern and support for the project of Songuo. 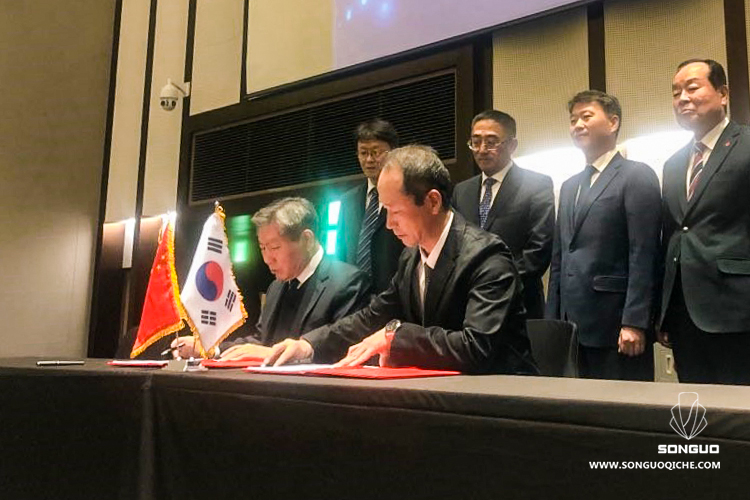 Since its landing, the Songuo project has received the attention and strong support of the Shandong Provincial Party Committee and Provincial Government, the two municipal governments of Dezhou and Yucheng, and competent authorities at all levels. As an innovative company, Songuo encountered the best times and the best business environment: met Shandong with the conversion of new and old kinetic energy, met the courageous and pragmatic Dezhou and Yucheng municipal governments, met Dezhou Financial Investment Holding Group that regarded industry leading and development as its responsibility. 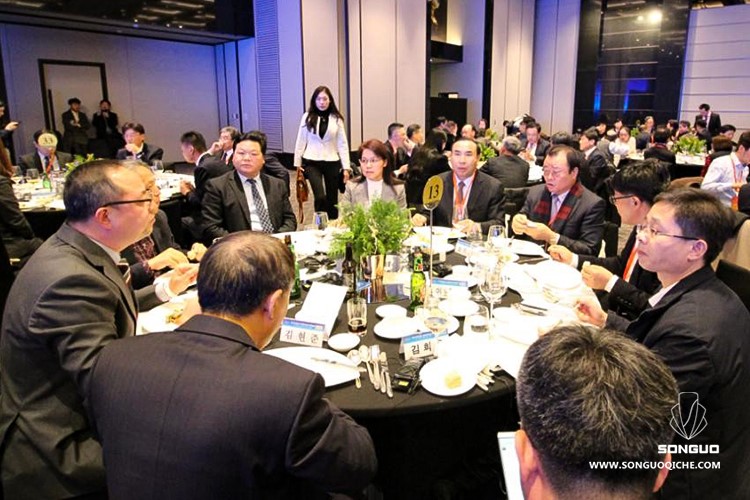 Over a year and a half, resources were superimposed and aggregated and then fissioned; in a year and a half, the project achieved orders of nearly $ 6 billion worldwide and won markets in 52 countries on five continents. Behind the achievements and luck, there are too many people's silent efforts, and I am grateful for Songuo: Thanks to the land of QiLu(Shandong Province) for the fertile soil for the seed of "Songuo" to grow and germinate; thank all the supporters and cooperation partners for the understanding of the original intention and dream of Songuo!

Today is a start for tomorrow. With this support, Songuo will continue to spare no effort and work hard to repay the care and love from all walks of life with better results!

Zhang Anmin, member of the Standing Committee and Secretary-General of the Dezhou Municipal Party Committee and Secretary of the Yucheng Municipal Committee, led a delegation to participate in the event, and met with Dr. Wu Bingshi, Deputy Minister of the Korean Ministry of Agriculture and Forestry, Professor Li Wanfu of the Ministry of Mechanical Engineering, Dr. Li Longxue, consultant of Korean Songuo, and Song Yinhuan, representative of Samsung SDI(as a partner of Songuo) and Li Fangyu, Chairman of SNK. With the accompany of Zheng Chunyuan, vice president of Songuo, he visited Saemangeum National Development Zone with leaders from the Foreign Investment Division and Investment Division of the Provincial Development and Reform Commission to promote the development process and continued acceleration of the Songuo Project. 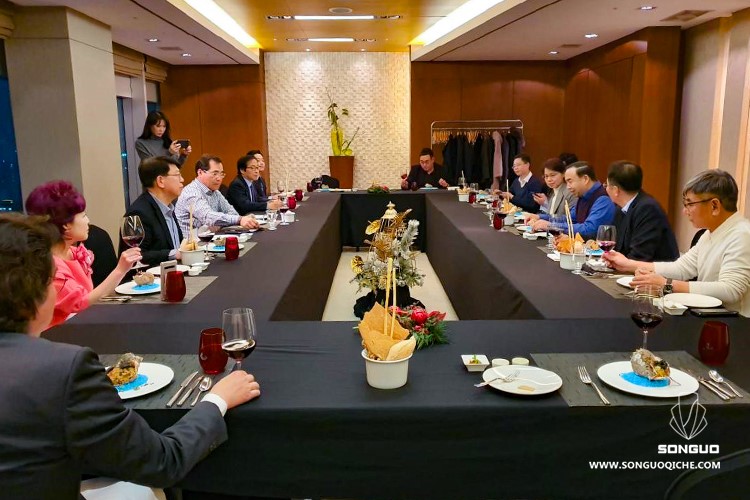